Finally. Over a month and a half since returning from my trip to New York City, I’ve finished developing, scanning, and processing all my film. I’m going to split my NYC trip into 4 different posts based on what camera I was using. Each camera/film combination provides a unique look at the city and because of that, the photos seem to flow together better when grouped that way. Back in mid-June, my brother Jason and friend Paul embarked on a 6 day, 5 night adventure to New York City. This is something that we had been talking about for the better part of a year.

We flew out of the Toronto Island Airport on a Wednesday evening after work and arrived at Newark, NJ an hour and a half later. By the time we reached our accommodations in Brooklyn it was around 10pm. Just enough time to grab a bite to eat and some refreshments and plan what we were going to do the next couple of days. This was my second time using AirBnB and it was fantastic. Our host met us at the apartment, gave us a brief tour and a rundown of the local area.

The next morning we were met with rain… a lot of it, so we made our way to B&H Photo where we stocked up with film supplies and stumbled upon “The Vessel” – a giant structural art installation that was completed in March 2019 that overlooked the Hudson Yards. Due to the rain there weren’t very many people there.

By the time we made our way up to the Intrepid Sea, Air & Space Museum, the rain had stopped and the sun was out in full force. At first I was a bit hesitant about going to this museum, partially because of the cost and the fact that it would eat up several hours. I’m glad we did it though as it turned out to be a highlight of the trip as we got to venture inside a submarine and see the Enterprise space shuttle (photo in a future post).

From there, we walked the length of the High Line, an old elevated rail line that has since been converted into an urban garden/hiking trail, into Greenwich Village for some lunch at small pub. It’s at this point I switched to using my other cameras and break this timeline. For all my colour film shots, I was using the small and compact Olympus XA and AgfaPhoto Vista 200 film. I used this camera setup for everyday stuff and when colour was present in a scene. Before leaving, a lot of people told me to shoot NYC in black and white, but I couldn’t help wanting to see the city in colour.

View of Chelsea from the High Line 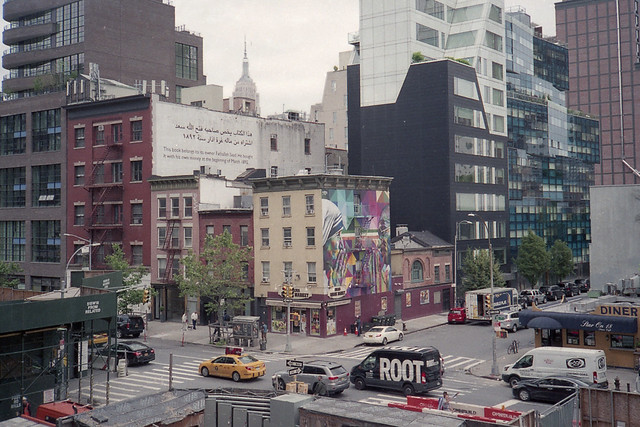 View of Chelsea from the High Line

In between buildings in Chelsea 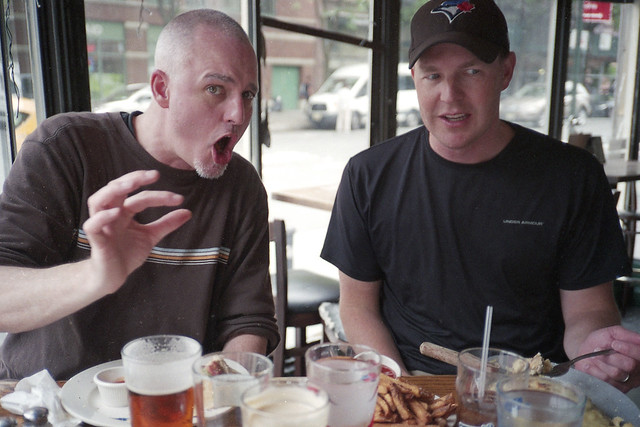 One morning, we headed into Manhattan and across the Brooklyn Bridge. I expected it to be busy, but not like that. At times it was shoulder to shoulder people walking and stopping for photos. The bridge itself was interesting to walk across, but I enjoyed exploring the Brooklyn side of the bridge more. We walked around some of the streets and down by the water, where there were surprisingly less people.

Sitting on the steps in Foley Square 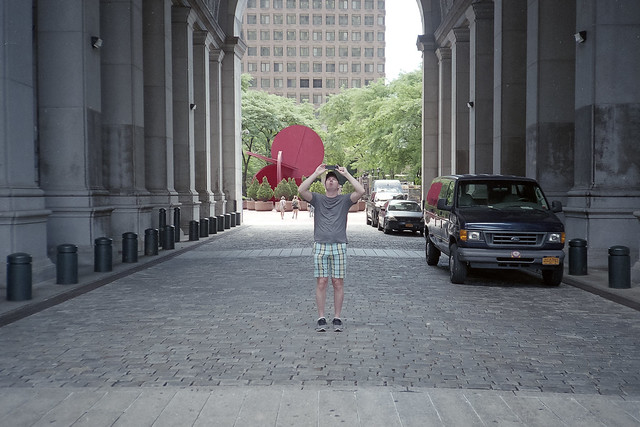 Leading up to the Brooklyn Bridge

Strolling on the Brooklyn Bridge 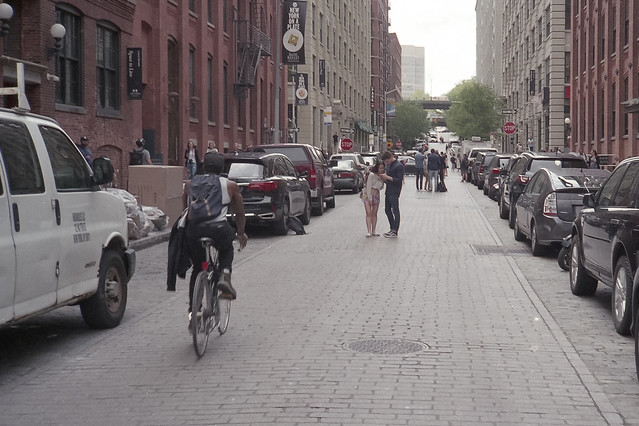 Reviewing photos in the middle of the street

Classic photo of the Manhattan Bridge

Drumming on buckets, pots, and a shoe

On the Friday evening we headed deep into Queens to catch a Mets game. We would have preferred to see the Yankees, but they were out of town. Citi Field is way out there, but totally worth the visit. They had so much stuff going on at the stadium and it was such a unique layout, that we ended up only staying in our seats for a couple innings before just walking around. After the game, we headed into Manhattan and Time Square. Even at midnight, the place was absolutely packed with people. It was neat to visit, but I don’t think I’d ever want to go back there.

Waiting for the subway at Prospect Park 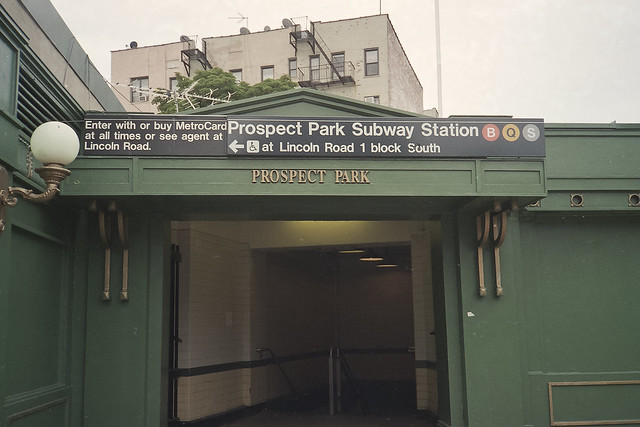 Entrance to subway station near our apartment

View from our seats

After exploring Central Park and parts of 5th Avenue, we made our way up to The Bronx to walk around Yankee stadium and have some lunch, before returning to Manhattan to grab some souvenirs. 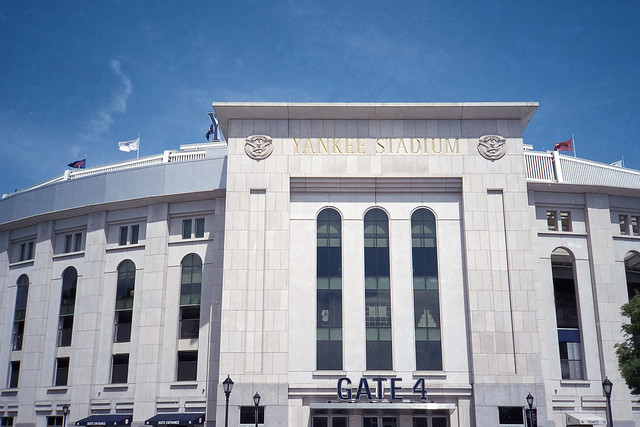 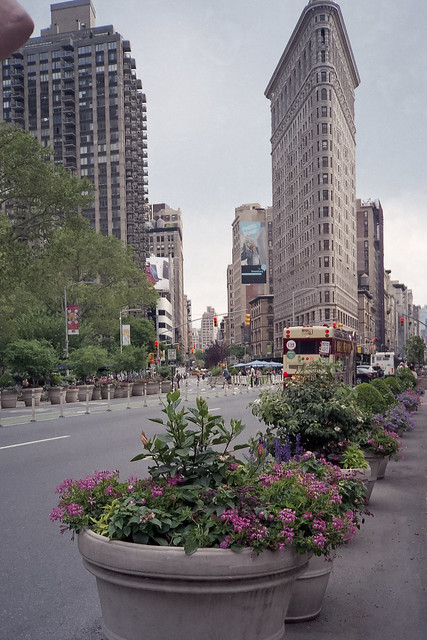 Outside the Metropolitan Museum of Art

Sitting by the fountain at the Metropolitan Museum of Art 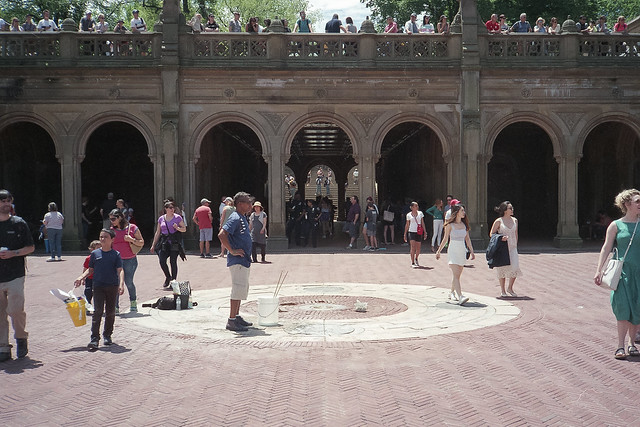 On the Sunday, we thought it might be interesting to head down to Brighton Beach and Coney Island to ride the Cyclone – one of America’s oldest wooden roller coasters. It did not disappoint. We jumped off the subway in Brighton Beach, also known as Little Odessa, due to it’s large Russian neighborhood.  We felt like outsiders as the only English speaking people there. As we walked along the beach towards Coney Island, the Russian faded and the English seemed to return. We explored the carnival area and walked out on the pier before heading back into Manhattan. We’d been told that the Staten Island Ferry was one of the best free things to do in the city, so we figured, why not. Plus, a beer on board was only $4. We sat, drank and watched the Statue of Liberty go by. We had lunch in a small pub on the island before jumping on the ferry back. This lunch had successfully marked our completion of 5 beers, in 5 boroughs, in 5 days. We were kings of the world. 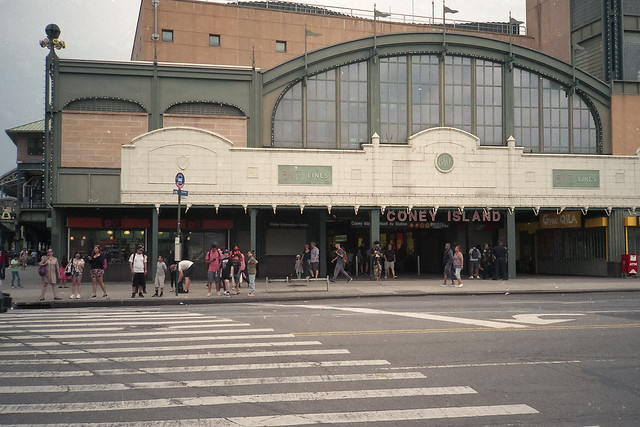 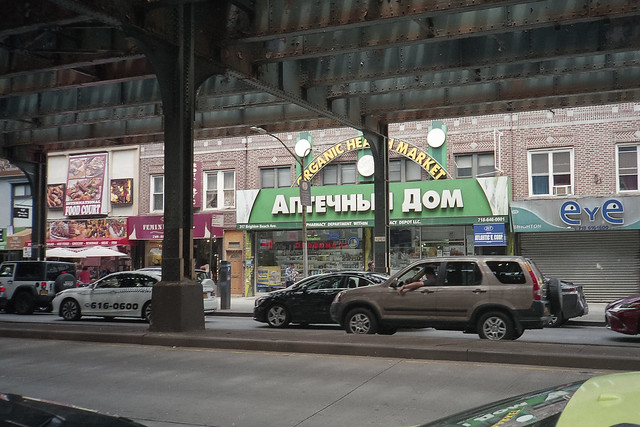 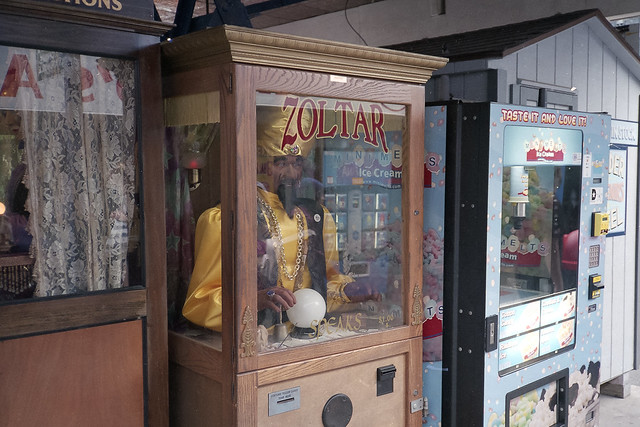 Zoltar (I wish I was big) 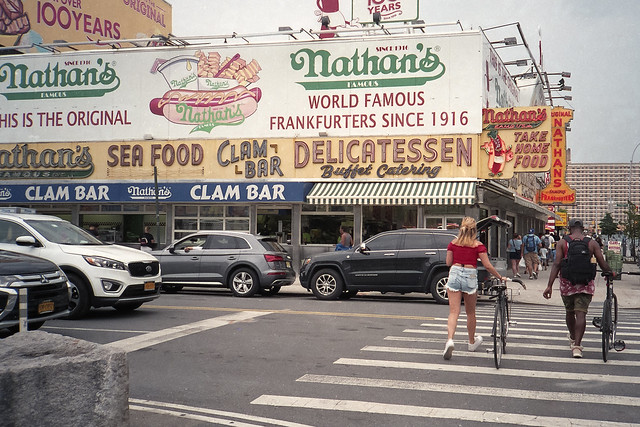 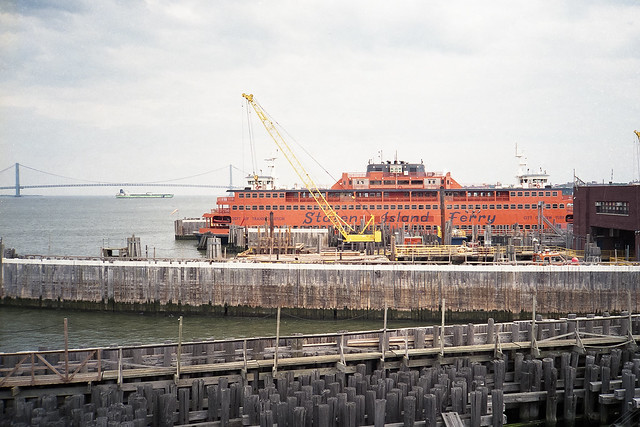 Stay tuned for 3 more posts that will look at photos from the trip in black and white, shots from a Holga, and some remaining iPhone shots.

Bergen Bagel became the go-to for a quick breakfast